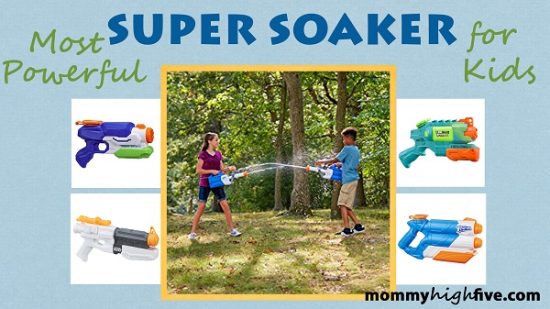 My siblings and I always had a great time playing with Nerf guns and Nerf Super Soakers. It’s great to see the next generation enjoying it like we did. We aren’t talking about the original Super Soaker CPS 2000 I knew and loved as a kid, but the current line of Super Soakers are the most powerful water gun out there.

On a hot summer day, nothing is better than cooling off in the water. And for kids, nothing is better than spraying each other with a Super Soaker. I know my kids love getting together with their friends, splitting up into teams, and having a Super Soaker war. They love that they can socialize and have a great time, and I love that they can get some exercise and get away from screen time.

Some other fun ways to keep kids active are fishing and swimming.

What to Look for in a Good Super Soaker for Kids

Here are our recommendations for the best Super Soaker for kids: 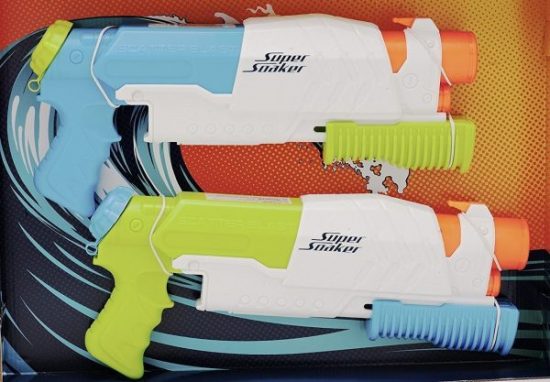 This blaster is great for kids of all ages. The pump handle is easy for anyone to use, as the pump moves easily. With a water tank that holds 22 ounces (650 mL) as well as five streams coming out of the gun, the only negative to this option is that it runs out of water fairly quickly. However, if you have a bucket of water close by or use the Scatterblast Blaster in a pool, you can refill quickly.

The Scatterblast Blaster shoots up to 33 feet (10 m). While this gun is great to use as a toy, some have even found it is powerful enough to deter varmints or even help with cleaning projects. So, get creative and see how the Nerf Super Soaker Scatterblast Blaster can potentially make your life easier!

One of the best things about this gun is it comes in a two pack! 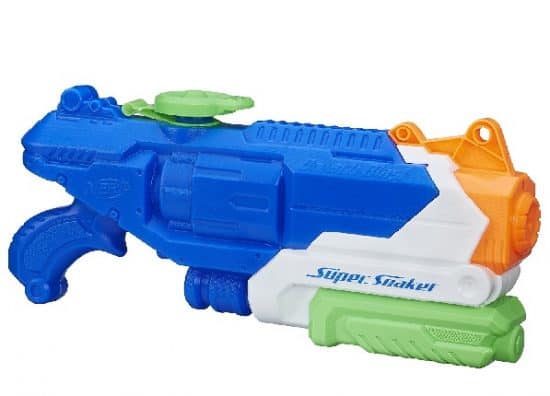 This soaker holds a whopping 50 ounces (1.5 L) of water, which is one of the largest capacities of any Super Soaker. You won’t have to refill as often as with other options, and that is a definite advantage in a water war. The Breach Blast is compact and shoots 38 feet (11.5 m) and accurately hits with a powerful continuous stream of water. You’ll keep your competition retreating over and over again.

There is no trigger on this model; it works just through the pump action. It also tends to leak around the water tank if you don’t tilt the gun. We recommend filling the water tank outside for this model in case it leaks.

What we like: continuous water stream, huge water tank 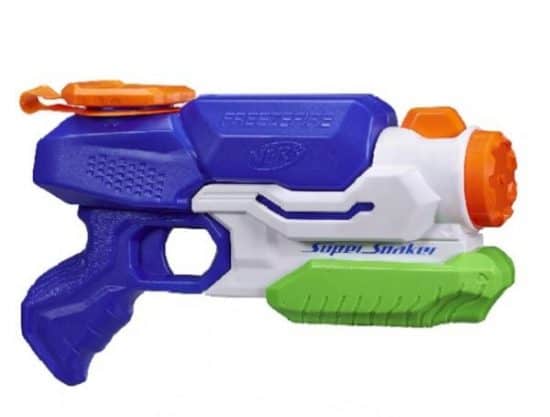 A wide tank opening makes it easy to fill with water and add ice, which is good because there is only a 23-ounce (680 mL) water capacity.

This model is not as accurate as others, but it is fun to hit your opponent with a stream of freezing H20!

What we like: easy-to-fill tank, capability of adding ice 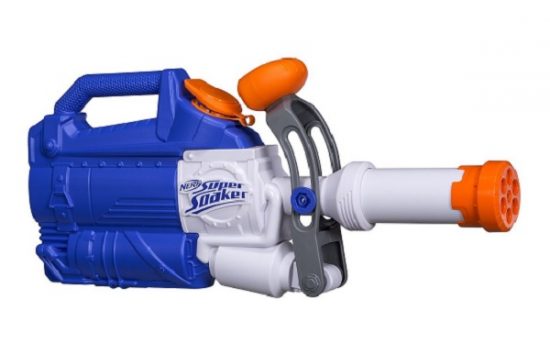 OK. This is the king of all water guns. Think bazooka with water. Not only is it extremely powerful, it also holds 55 ounces (1.6 L) of water. You will be able to keep spraying your friends while they have to stop and reload. The larger volume single stream drenches your competition while they have to reload.

The biggest drawback of the Soakzooka is that it only shoots 25-30 feet (8-9 m). Rather than a trigger or a pump, the Soakzooka has a handle. Simply pull the handle and the water shoots out. It is easy to operate and so fun to use! 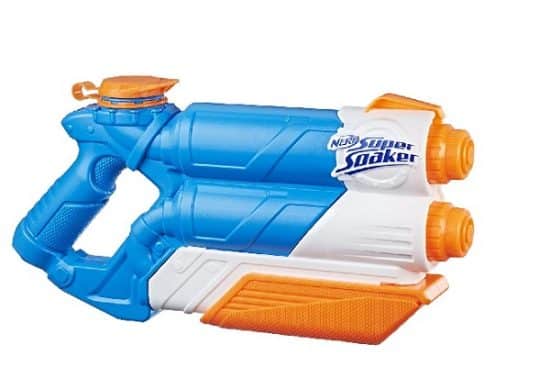 The Twin Tide has two separate barrels, so you get two streams of water for double soaking! The water tank holds 33 ounces (975 mL) and has a large opening so it is easy to fill. This gun shoots 25-30 feet (8-9 m).

While some pump water guns are hard to pump, the pump action on this model glides well. There is no trigger on the Twin Tide; just pump and spray two powerful jets. The Twin Tide is a new model and doesn’t disappoint.

What we like: easy to pump, dual water streams 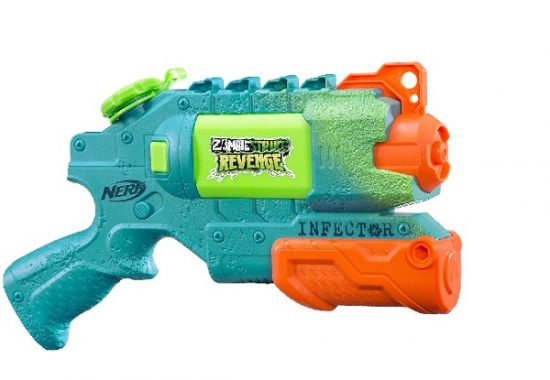 What kid wouldn’t love the combination of a water gun and zombies? The Zombie Strike Revenge Infector is a well-made gun and is easy to use. It gives kids a fun imaginative scenario to use while having a water fight.

The Zombie Strike Revenge Infector shoots quite far, up to 38 feet 11.5 m). The only negative we found with this gun is that it only holds 12 ounces (354 mL) of water. That means an awful lot of refilling, unless you have multiple guns you can trade off using. 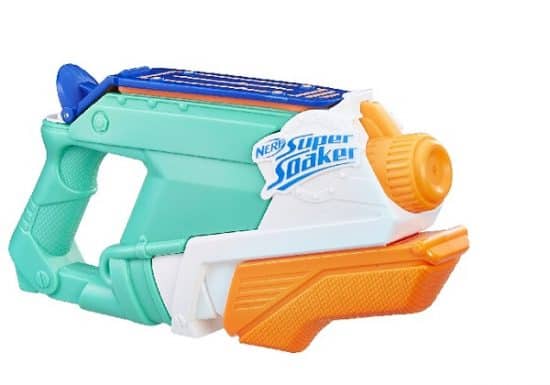 The Super Soaker SplashMouth gives two options for getting someone wet. You can either pump the gun and spray water or open the hatch on the top of the gun to dump water on your opponent.

This model is great for kids of all ages. The pump action moves easily, and there is no trigger. To fill the gun, just flip the hatch open and dunk the gun in a bucket of water or put it under a tap of running water. It holds 20 ounces (591 mL) of water.

Some tanks are hard for young kids to fill, but this one is very simple for anyone to fill. This is our choice for best Super Soaker for young kids.

What we like: spray or dump options, great for young kids 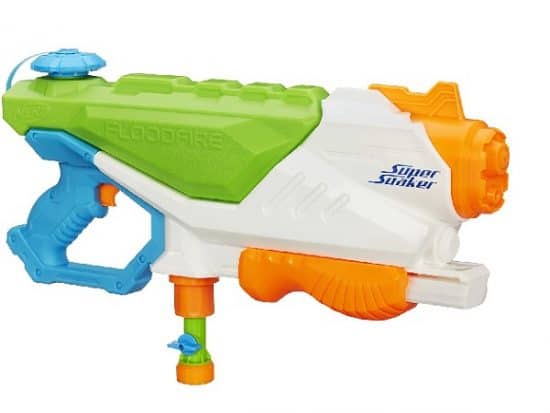 This is the perfect choice if you don’t like having to stop and refill the water tank. The Floodfire Blaster can be attached to a hose for unlimited firing and is the most powerful Super Soaker. Or you can use the 43-ounce (1.27 L) tank without the hose and still get good use before refilling.

This gun has pump action and a trigger. Handling both mechanisms at once can be tricky for small hands, so young kids might need help working it. The Floodfire Blaster shoots up to 38 feet (11.5 m) and is heavier than most of the options on this list. 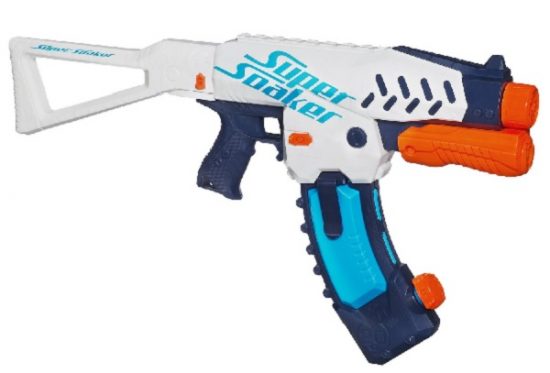 The Switch Shot Blaster is easy enough for a young child to use, but also fun for older kids and adults. Unlike any of the others on this list, it comes with a detachable stock.

A banana clip is the water tank and holds 20 ounces (591 mL) of water. You can buy extra clips to use as opposed to refilling every time you run out of water. Your opponents will be jealous of your ammo power!

With this gun, you can shoot up to 3 streams at once. There are four different modes; simply turn a knob to change the mode.

The shooting capacity for the Switch Shot Blaster is 25 feet (7.6 m). While this product is more expensive than most on the list, it is very durable and so much fun! It is our pick for best Super Soaker.

What we like: detachable stock, banana clip, 3 water streams 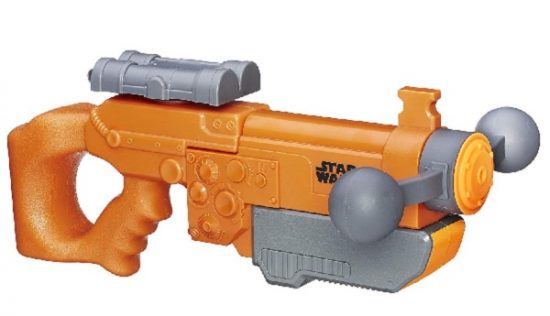 For the Star Wars fan, join the Wookie force to fight the First Order with the Super Soaker Chewbacca Bowcaster. It is made to like Chewbacca’s crossbow, and kids love it! This fun themed gun shoots up to 38 feet (11.5 m) and is easy to use, even for young children.

The gun holds 17 ounces (502 mL) of water. The water cap is hard to close so a child might need help to do that. It has good power and is the best themed Super Soaker. 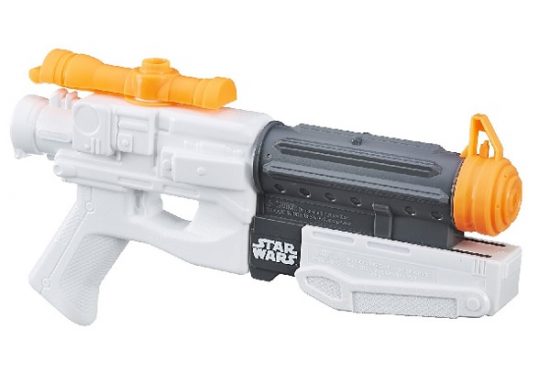 The Super Soaker Storm Trooper is a powerful gun that makes a fun addition to a water fight or as a prop for a costume. It shoots up to 35 feet (10.7 m) and holds 16 ounces (473 mL) of water. Unfortunately, you will have to reload fairly often.

The pump action is easy for anyone to operate, and the gun is accurate. The Storm Trooper gun is so fun to use with the Chewbacca Bowcaster and the Han Solo Blaster.

What we like: Storm Trooper themed, accurate and easy to use 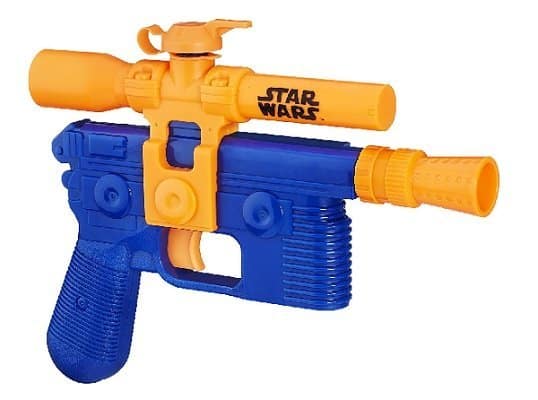 A very lightweight option, the Han Solo Blaster looks like Han Solo’s actual blaster. It is smaller than the other options and not nearly as powerful. With the firing capability of up to 20 feet (6 m) and a tank that holds 6.7 ounces (198 mL) of water, this is a good choice for young kids. Older kids will be frustrated with the need to refill often.

This blaster is a fun themed option, but it is not nearly as good as the others on this list.

For a memorable birthday for your child, plan a water gun birthday party.

Fun games you can play with Super Soakers:

For a memorable birthday for your child, plan a water gun birthday party. 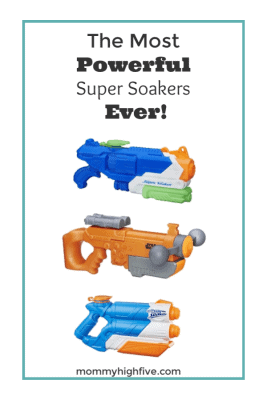