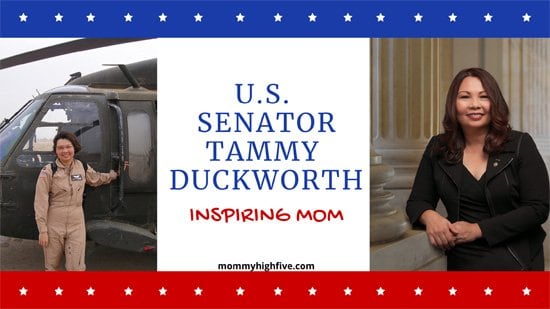 Everyone needs to hear this story, this ongoing true story about a woman who devotes herself to protecting and representing people. Tammy Duckworth, currently a U.S. Senator for Illinois and vice-chair of the Democratic National Committee, has spent her adult life advocating for others.

Why is it crucial for people to know about her? Because it’s people like her who make this country what it is. Without the sacrifices she’s made and the determination she’s shown, we wouldn’t enjoy the freedoms, rights, and privileges we do. These things don’t just happen; inspiring people like Senator Duckworth make them happen.

Much has already been written about this extraordinary woman who shattered so many barriers when she was elected to Congress; not only was she the first Thai American woman and the first female double amputee to serve as a U.S. Senator, but also the first to give birth while in office. So clearly I’m not the first one to take note of her, but I hope to present a humble tribute to a woman I personally admire.

These days she’s exceptionally busy with an enormous amount of demands on her time. Although I wasn’t able to speak with her, I appreciated her responses to a few of my questions. Someday I hope to meet her, but I respect her work and want to free up her time so she can pursue her more than worthy endeavors changing the world. We can learn more about Senator Duckworth by examining her work and service, where her heart clearly resides. So let’s take a closer look at how she’s exerted her energy since doing so will give us a better idea of who she is. 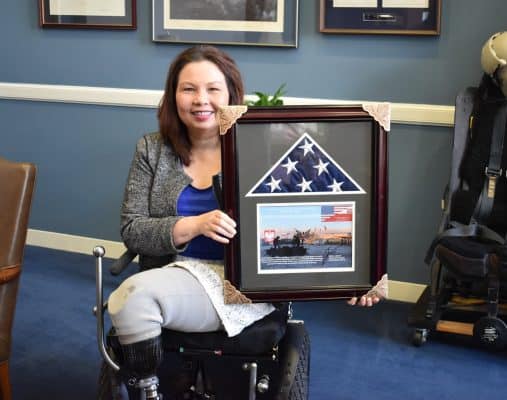 When I asked about Senator Duckworth’s background, she first said, with what I imagine to be a bit of patriotic pride, “I’m a combat Veteran and Blackhawk helicopter pilot [who] … served 23 years in the Reserve Forces.” I learned she served in the Iraq War and received the Purple Heart for her time there. In fact, her website says she was “among the first handful of Army women to fly combat missions during Operation Iraqi Freedom.” After 23 years in the Reserve Forces, Duckworth retired in 2014 as a Lieutenant Colonel.

Shortly after her deployment to Iraq, she experienced a devastating attack. Senator Duckworth explained, “Sixteen years ago, an RPG (rocket propelled grenade) tore through the cockpit of the Blackhawk I was co-piloting in Iraq—taking my legs and partial use of my right arm with it.” After the attack her legs were amputated and she spent considerable time recovering at Walter Reed Army Medical Center. 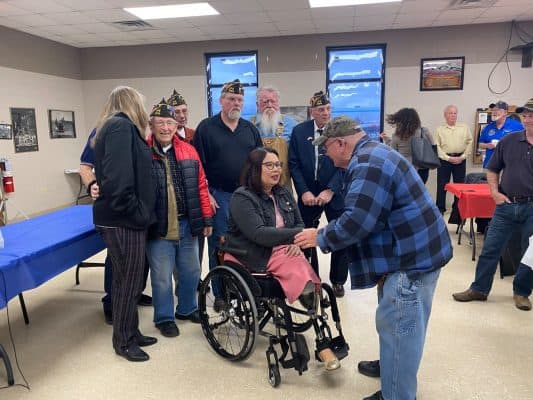 She tells me this was the moment that most shaped her life and that becomes evident as we consider the rest of her story. I was filled with admiration as I read what she had to say about the experience: “From the moment I woke up in Walter Reed, I vowed to find a way to make sure my buddies who carried me to safety that day never regret their sacrifices by working for all those who serve.” Although it would have been easy to cave to bitterness, Duckworth followed through with her commitment and went on to advocate for Veterans as the Director of the Illinois Department of Veterans’ Affairs. 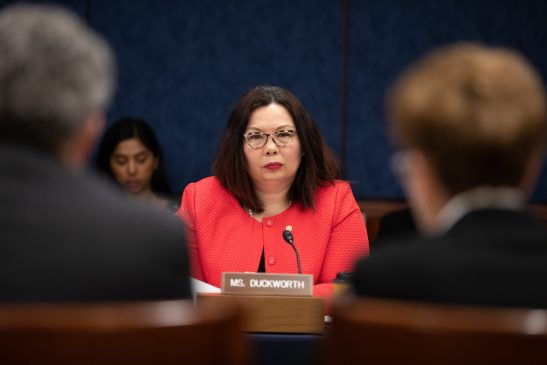 Today she sits in a wheelchair and continues to harness her experiences to stand up for others. To me, the way she’s chosen to respond to circumstances outside of her control makes her a hero!

Senator Duckworth describes her current role as Senator as a “distinct honor [to serve] the great people of Illinois.” However, her work creates benefits for individuals far beyond the state lines of Illinois. I’ve observed that on her online platforms she often issues a cry to resist complacency and fight to help others, which is exactly what she seems to do as a Senator.

Thus far, a few of the highlights of her service include bills aimed at helping to ease the daily life of those who may overlooked sometimes. As she explains, “I use my voice in the Senate to fight for working families, women, those with disabilities and communities who have been left behind for too long.” As an example, I recently read that she is sponsoring a bill calling for body armor designed specifically for women. The danger of wearing ill-fitting body armor, she explains, is that it creates openings which leave women more exposed and vulnerable to injuries. This is just one example of how she utilizes her leadership to enhance, even protect, the lives of others. 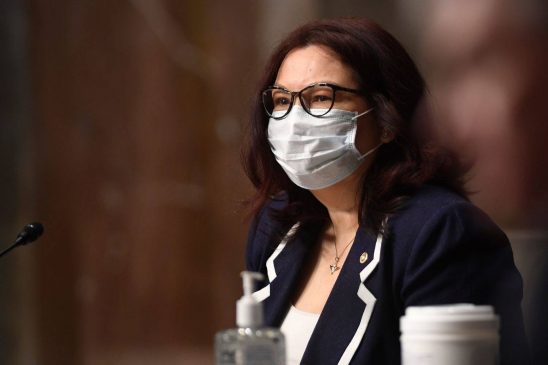 In response to my question about what aspect of her life she takes the most pride in, she mentioned several specific bills which have been signed into law as a result of her efforts. The FAM Act and FAM Improvement Act, both bipartisan bills, “make air travel easier for breastfeeding travelers.” She also pushed to require “air carriers to disclose how many bags, wheelchairs, and motorized scooters they damage or mishandle each month.” Another bill which became law helps Veteran entrepreneurs grow their small businesses. These are all examples of how Senator Duckworth serves as an advocate to mothers, disabled, and veterans. If she isn’t the definition of an inspiring mom, I don’t know who is!

But her endeavors don’t stop there. In general, she works for “practical, common-sense solutions needed to move our state and country forward.” She is a true agent of change as she helps to create jobs and fight for communities which traditionally have not had a voice. 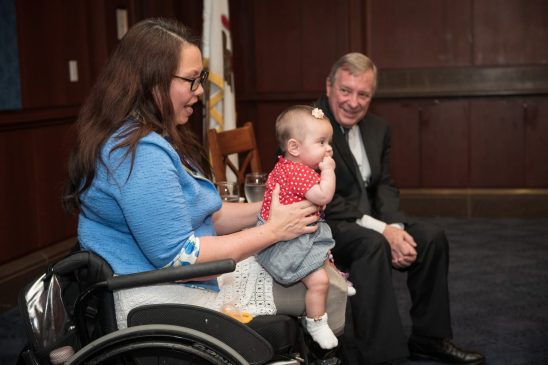 After hearing about her life as a public figure, it might not be immediately apparent how Senator Duckworth is just like you and me. But like many of my readers, she is also a mother who is trying to juggle parenting amidst the COVID-19 pandemic. And as a mother, she is definitely inspiring.

Senator Duckworth described herself as the “proud mother of two beautiful daughters, Abigail and Maile Pearl—ages 6 and 2 and a half.” As an interesting side note, Maile Pearl was named after her Great Aunt Pearl who was an army nurse during World War II. I’m curious to see what the future holds for young Abigail and Maile Pearl growing up with a mother who shows them every day what it means to fight for justice.

What a mother she must be! I say this because it is clear that she intends on sharing her passion for powerful women leaders with them. As an example, Duckworth and her daughters paid their respects when Ruth Bader Ginsberg, the incredibly influential Justice of the Supreme Court, passed last fall. I was touched by her words on Facebook, “If it weren’t for her decades-long fight for equality and women’s rights, I wouldn’t have been able to have my daughters. Though she’s not with us anymore, her fight—and our fight—continues.”

You may have done the math and realized that Maile Pearl was born after Duckworth assumed office as a Senator. This meant that as a newborn she accompanied her mother to vote on the Senate floor, which had never been done before. 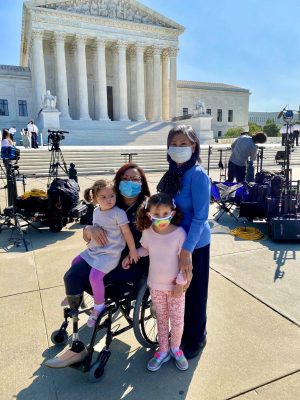 I recently read a compelling Vogue article about Senator Duckworth which pointed out that not only was she responsible for a resolution to permit infants under the age of one on the Senate floor, but also the first member of the Senate to be born in Thailand. Duckworth’s father was an American who served in the U.S. army and her mother was of Chinese descent. I’m sure that her own immigrant mother greatly influenced her work today.

In our correspondence, she related that she’s trying her best to be a full-time mom and a full-time Senator. What she said next was quite humbling: “While this may be hard, it’s nothing compared to the working moms out there who are making it work without being able to work from home, without paid leave, and without the affordable childcare they need to actually go to work.” This statement serves as another exhibition of Duckworth’s passion for defending women, especially mothers.

On a personal note, Senator Duckworth’s fierce drive reminds me of a novel I quite enjoyed reading recently. In Salvage the Bones by Jesmyn Ward, Skeetah, the proud owner of a fighting pitbull who has just given birth, debates with a friend over how fit the dog is to fight now that she’s had a litter of pups. I believe that his response applies to Senator Duckworth and I think you’ll see why. Skeetah memorably says, “To give life is to know what’s worth fighting for.” Motherhood truly can make us stronger and give us a powerful reason to fight, as I suspect it has for Senator Duckworth. 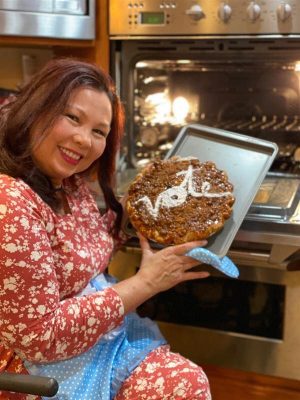 As an empathetic person, Senator Duckworth sends out heartfelt advice to “all of those moms out there trying to balance work and homeschooling their children during the COVID-19 pandemic.” She says simply: be kind to yourself. I can attest that it is easy to feel discouraged about our efforts at raising our children during such turbulent times.

As moms we wonder if we’re doing enough. Senator Duckworth can relate to our struggles and tells us, “We’re all doing our best and we’ll get through this together—even if we’re actually apart.” Her words remind me of the comradery that unites us as mothers around the world and offers reassurance that we are not alone. What an uplifting message!

More valuable advice from Senator Duckworth is issued from her social media accounts. I admire how she uses her leadership to influence her followers and supporters to do important things like vote. In fact, she is one of my favorite people to watch on Twitter because of the clever, engaging ways she expresses essential messages. For instance, last month she tweeted: “Mom advice for the day: the best way to spread Christmas cheer is wear a mask from ear to ear.” 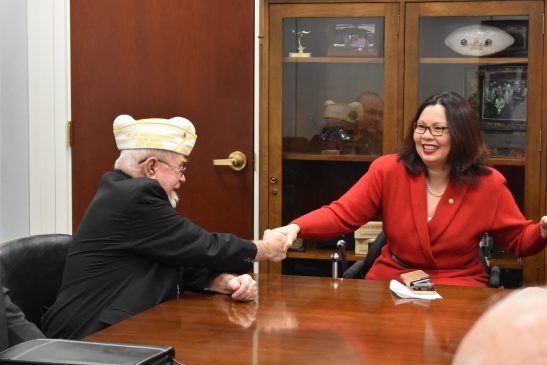 In closing, I’m grateful to live in a world where there is a woman like Senator Duckworth among our country’s leaders. From where I sit as I finish this tribute, I see her legacy being one of empowerment. She has shown all sorts of individuals, from women to veterans to immigrants to mothers, what is possible. Thank you Senator Duckworth!

While she is often seen in the news, I encourage my readers to also follow Senator Duckworth on social media to more closely follow her inspiring work. She shares poignant insights, crucial tips, and worthy causes on Facebook, Instagram, and Twitter. You can also email her or schedule requests on her website where she generously states: “My office is your resource.”