You are here: Home / For Moms / Addictive Mobile Games: How Your Kids Are Being Targeted 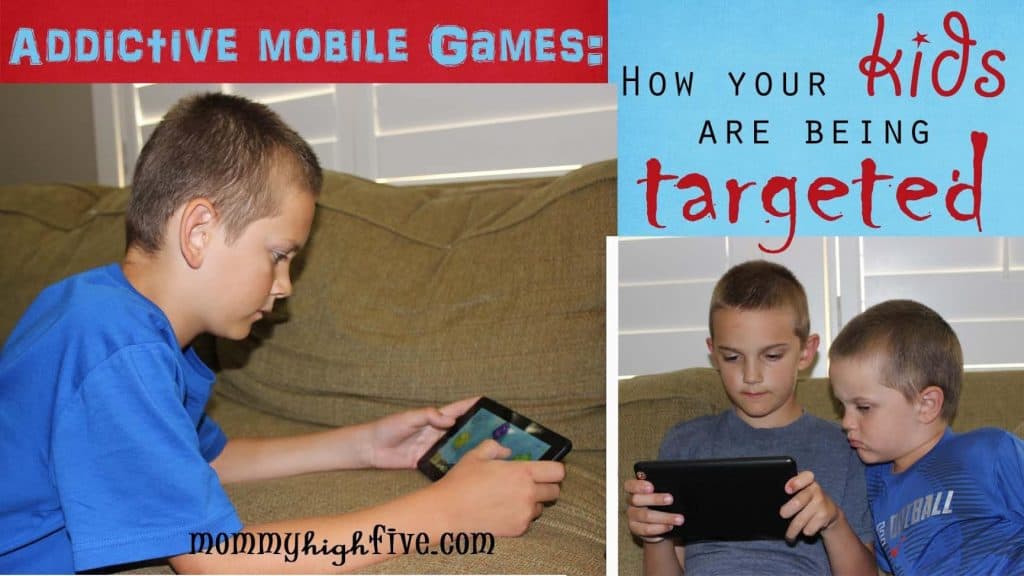 Most of our parents grew up in a generation before the computer was mainstream. When the computer, internet, and video games began to swarm the market in the 80’s few of them knew what to expect.

Many years later parents could point to scientific studies that linked violent video games to aggression.

Dr. Bruce Bartholomew, associate professor of psychology at the University of Missouri said, “Video games are excellent teaching tools because they reward players for engaging in certain types of behavior…. Unfortunately, in many popular video games, the behavior is violence.”

Whether or not it’s a part of a study, I see aggression in all of my kids when they simply have too much screen time. It’s something nearly every parent I’ve spoken to has seen in their children or others.

Today, I see increased aggression as being only one of our worries. Other side effects from too much screen time like shorter attention spans, addictive patterns, and depression are just as worrisome.

As a parent born as a Generation X/Millenial crossover, I always hoped that I’d be more informed about technology than my parents were. Now, I’m not so sure. Keep in mind that as a tech and gaming blogger, I’m typically up-to-date on the latest trends. Today technology is changing faster than ever. So, who’s to tell us what the next scientific study will show by the time it’s too late?

That’s where good parenting comes in. You have to make adjustments based on what you see right now and not just what’s in the latest scientific study. Still, often times we simply can’t see the dangers our children face.

While screen time is certainly one of those dangers, I want to go over some disturbing trends I’ve seen in mobile games.

That’s where more kids are playing now than ever. The NPD group released a report showing that more and more kids are moving away from PC and console gaming in favor of their handheld devices. That trend will likely continue.

You see, if PC and console video games of the past awarded kids, and adults for that matter, for engaging in violence, today they reward them for engaging in addictive behavior. This is especially alarming when you consider how big of a problem that internet and technology addiction already is.

How Game Developers Use Addictive Behavior to Target Children (and Adults)

Developers make games which force players to come back multiple times during the day in order for them to succeed in the game.

I’ve seen this most often in the form of energy that is used and recharged over a long period of time. So, while you’re asking them to take out the trash, do the dishes, or fold the laundry, they’re often times thinking about how soon they need to get back to their game. If they don’t come back, they’ll miss out on using their energy and fall behind in the game.

Shortcuts can be taken in most games by spending money, but that money only gets you so far. Characters or new levels are often unlocked this way in a casino slot machine type fashion. So, getting everything you need in the game is highly unlikely, and spending for the truly addicted adult may even reach thousands or even hundreds of thousands of dollars. One Saudi player even spent $1 million to get ahead in the popular app Clash of Clans.

Once in a while, your child might get something extra rare in the games they play. I’d compare this to every compulsive gambler that occasionally wins big. When they win and play they feel happy and their brains are filled with *dopamine. It keeps them coming back for more.

*Dopamine is a feel-good chemical the brain uses as a reward system. As children are exposed to it, they become less sensitive and need more of it.

In these types of games you can progress with or without money. In fact, many of them are advertised as free to play. But you can only get the reward if you’re there. They need to be in the game again, and again, and again.

It’s not like Mario where you bought a game and got the entire game (although that’s exactly the type of game I’d recommend). It’s a game that doesn’t end, and that’s exactly the sentiment these mobile game developers are exploiting in children and adults.

As a Parent, What Can You Do?

While it may be easy to let your child download what’s technically a “free to play game”, understanding what goes on in that game is key. There are a lot of websites that have helpful information in seeing what type of a game it is. I recommend the Family Online Safety Institute as well as Common Sense Media.

Screentime is making Kids Moody, Crazy, and lazy says Psychology Today. Using an app like Screentime can help. Apps like this one allow you to control how much time your child spends on their devices. It also shows you where they are spending their time.

Although it’s easy to let your child download an app when it’s listed as age-appropriate, don’t stop there. Many apps that seem age appropriate may have extremely addictive qualities in them. Go into the app and understand the type of game your child is playing. Will it require them to come back at different times during the day? If so, I’d recommend you uninstall it right away.

With all of this, the best way to know is to watch the behavior of your child. If they’re showing you addictive type behaviors, I highly recommend you get rid of the source of that behavior. It may take some real patience on your part, but it’ll be worth it for their long-term growth and development.

I also question the targeting of children by developers. As money is so heavily involved, perhaps we can’t blame them. Perhaps laws need to be made that limit these types of games to children. For now, use your best judgment.