You are here: Home / For Kids / Teens / Best Black Friday Deals for Teenagers and Pre-Teens 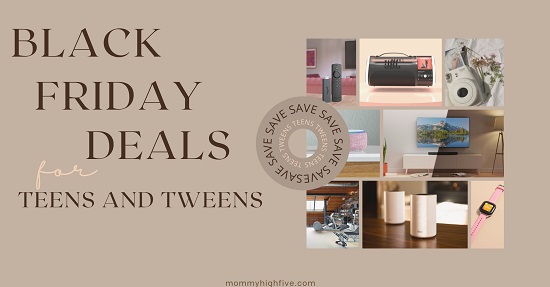 At Mommy High Five we are huge fans of any online sale, and Black Friday is no exception. We have been watching this sale get bigger and bigger year after year including a whopping $4.8 billion sold last year. This year whether you are looking for a new NERF gun or a great new camera for your daughter’s 14th birthday, Amazon is going to have a great deal for you on Amazon’s Black Friday Early Deals Front Page.

2. Free Gabb Phone Without Contract or Gabb Watch or Plus Phone with Contract

3. Up to 35% off Panasonic Instant Cameras

7. Up to 14% off Canon Mirrorless Cameras

1. Up to 39% off Entry Level Gaming Laptops and Computers

2. Up to 35% off Advanced Level Gaming Laptops and Computers

Headphones and Earbud Deals for Teens

1. Deals on Apple Headphones and Airpods

2. Up to 40% off Beats Headphones and Airpods

2. Free Gabb Phone Plus or Watch with Contract

3.  Get the Troomi Phone for $50 off. Must enter MHFIVE as the promo code

4. Up to 30% off Oakley and Costa Sunglasses

6. Other Huge Deals on Video Games

1. Up to 50% off Bowflex and Schwinn Equipment

3. Up to 39% off Table Tennis and Sports Products

5. Up to 45% off Shuffleboard, Billiards, Table Tennis

What Is Black Friday?

Black Friday is the Friday after Thanksgiving in the United States. The first documented use of the term “Black Friday” was in Philadelphia in 1961. Most people today think of it being called Black Friday because of high sales the goal is to put retailers in the black. Black Friday deals can be so good that they cause customers to wait in line, or even pay others to wait in line up to days in advance.

What companies have the best Black Friday deals?

This really depends on what products you are looking for. Generally Amazon, Walmart and Target are best for general items, some of the best deals go really fast. I find it can be easier to get deals on places like Sam’s Club and Kohls because although they have good deals, they don’t go as fast. There are also good deals to be had at hardware stores like Home Depot and Lowes or electronic etores like Best Buy.

When do the best sales start?

Most Black Friday deals start on Thanksgiving, including some great deals below. Some of the better deals do not start until early on Friday. This year due to COVID-19 Black Friday sales are already starting now in October. This is due to potential shipping and logistics delays that are plaguing the country and the world.

What Type of Teenager Gifts Should I Target in the Sale?

Around Black Friday Amazon always has some great deals on the Fire, Dot, or Kindle. Most high schoolers would love getting these for Christmas. If your teen would like one, now is a great time.

There are always great deals on TVs, laptops, phones, bluetooth speakers, headphones, mp3, and many other electronic gifts your teen would just love to get their hands on electronics for Christmas. All teens love electronic devices, making this a great time to buy your Christmas gift for the teen in your life.

Clothing and jewelry can often be marked down even more than electronic devices for Black Friday making these items a great target to focus on for this week. The best part is you can avoid the lines and get a hold of a great looking pair of jeans, sunglasses, coats, and so much more.