You are here: Home / Blog / Tips on How to Get Your Toddler to Give Up the Pacifier 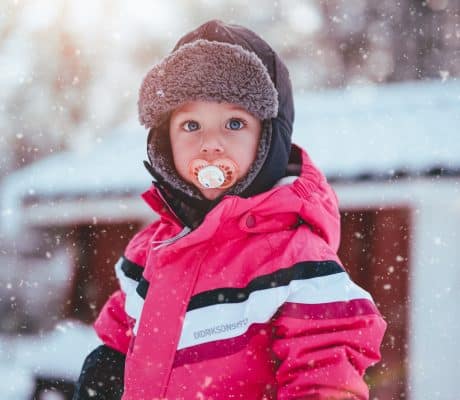 It goes by many names: paci, binky, soothie. (I heard they call it a “dummy” in Australia!) But one thing most moms agree on is that our relationship with it is love-hate, at best. It’s the greatest invention ever when it keeps your baby asleep at night or quiet at crucial times, but it doesn’t take long to start cursing your dependency on it when you can’t find it (but it’s all he wants!). Not to mention the constant struggle of keeping it clean! Getting rid of a pacifier definitely isn’t a snap, however.

I recently went through this with my toddler. I had been dreading the break-up for a long time because he had been very attached to it since he was tiny. A few times in the last few months we came to close to making midnight runs to buy a new pacifier because we couldn’t find any at home. It was so frustrating. I had also noticed that it wasn’t soothing him as much anymore. He still wanted it, but it was like he was just in the habit of having it, but has stopped really using it. He chewed on it too so it was getting damaged. My son was approaching 2 ½ years old, and I was just losing my mind with all the hassle of keeping track of it.

And of course, there was always that little voice in the back of my head saying, things like What if he isn’t talking as much as he should because the pacifier is always in the way? What if his teeth are getting ruined? Yes, it’s true that a downside of prolonged pacifier use is that it may have adverse dental effects after 24 months (though the effects are more significant after 48 months), according to the American Academy of Family Physicians. Clearly, we needed a change! 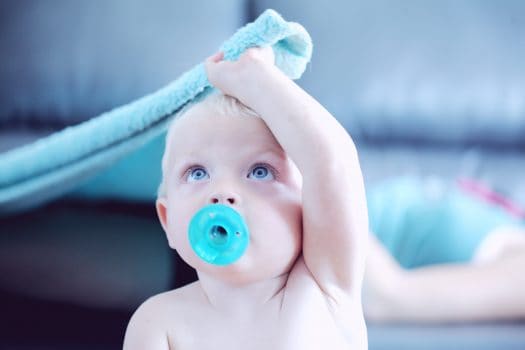 If you’re at the point where the benefits no longer outweigh the drawbacks and it’s time for a binky break-up, consider these ideas for getting rid of the darn thing. Just keep in mind that some of these ideas are better for older toddlers and some work better if your toddler isn’t already overly attached to it. As with most things, you will have to be the judge of what’s right for you and your child.

How to Wean Your Child from a Pacifier

1. Help your toddler start to associate the pacifier with his bed and bedtime/naptime only and reduce his dependency on it.

Starting at about 15 months, I would tell my son to leave his pacifier in his bed when I got him out. Usually he would drop it back in with no problem and we wouldn’t see it again until the next naptime or bedtime. Out of sight, out of mind. Things get a little more complicated when they get smart enough to go get it from their bed when they want it, so you may need to start hiding it once they leave the room after waking up. You can do this even if you aren’t quite ready to get rid of the pacifier completely. It’s a first step in the right direction.

Stopping the use of a pacifier is kind of a big deal to a little person, so do it when that’s the only big thing going on for them. If you just moved, just started a new daycare arrangement, are about to go on vacation, or recently experienced any kind of change that affects their routine and their sense of normal, including injuries or illnesses, consider waiting two or three weeks until things have calmed down. At the risk of contradicting myself, I would also add that putting it off for minor reasons is just prolonging a problem that may get harder to solve as time goes on. So don’t procrastinate for small reasons. When it’s time, it’s time–and you have to just go for it. Sometimes dreading it is worse than the actual thing so don’t let your fear stop you. 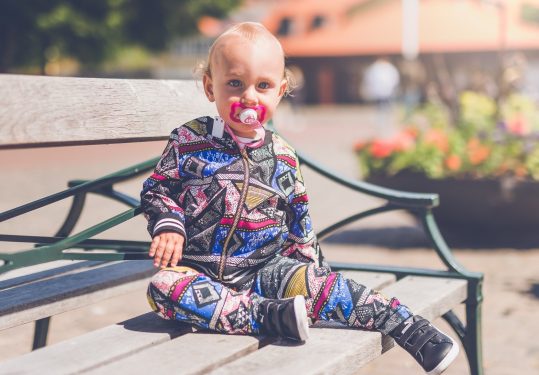 3. Recognize from the get-go that the break-up will be hard.

Whatever route you choose, this will most likely NOT be smooth sailing at first. It’s breaking a habit so you’ll see a form of withdrawal. There will be a few days of extra crankiness. You may be tempted to give the pacifier back, but STAY STRONG. Your toddler will follow suit soon enough and then you’ll be binky-free! Yay! And remember, don’t turn back or all your work is for nothing. This a thought that helped me a lot and encouraged me to stick with it. Perhaps on the third day, the crankiness will be at its peak and as tempting as it is to give up, the next day may show a huge improvement. Toddlers experience intense emotions, but they are also very resilient and can do well with change if they are supported.

“If we can say bye-bye to the binky, we can get this fun dump truck instead.” It will likely work up-front and the real work comes later when he asks for the binky again and you have to firmly say, “You chose the truck instead of the binky. Remember?” And then stick to your guns. Younger toddlers may not grasp this concept of trading yet so this may not be the best option for them.

5. Cut the tip of the pacifier off.

Just the very end, so there’s a hole there–and no more suction! That’s what makes it so soothing to suck on. Once the pacifier isn’t serving its purpose anymore, your toddler will likely discard the pacifier without prompting. It’s possible he will keep it just to chew on so you can choose to explain that it has to go in the trash because it’s broken, or wait and see if he loses interest in chewing it and you can just throw it away on your own. 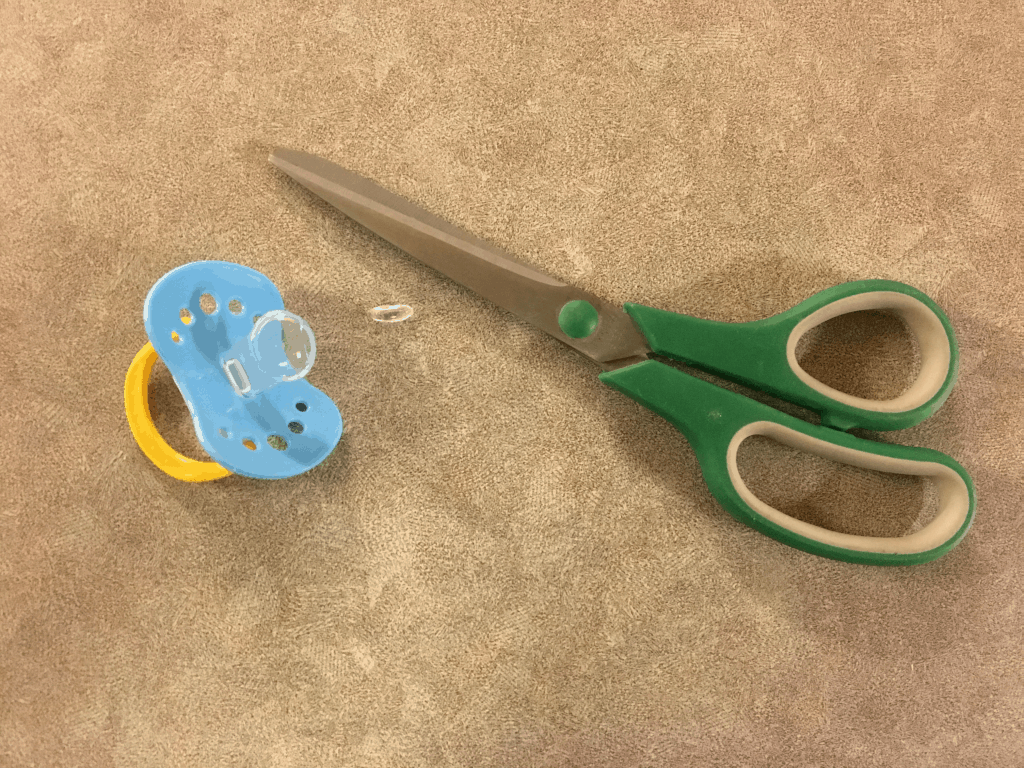 6. Tell him the pacifier got lost.

But secretly throw it away. If he’s familiar with the concept from misplacing a toy, then he might grasp this and maybe some of the frustration he feels won’t be directed at you since it’s “not your fault” that it got lost. You can even help him look for it, but only briefly. Then you need to redirect him to something else to get his mind off it.

Go on a walk, cook dinner together, read books, have a tea party, play dinosaurs. Whatever it takes to get his attention elsewhere. I don’t recommend distracting with sugar or electronic devices if you can avoid it–that’s just replacing one habit with another that is potentially worse. He won’t know it, but he is learning to manage his emotion without the pacifier “crutch”. If your child has a special toy or lovey, this can be a great comfort in this tough time, so keep it close and let him transfer his affection to that instead.

8. Develop a strategy for nighttime.

There are lots of ideas out there for good sleep strategies and whole books written about them. The strategy that makes sense to me is teaching your toddler to go to sleep in the conditions in which he will need to stay asleep and go back to sleep after an unexpected mid-night waking. Not having the pacifier anymore may tempt you to go to great lengths to get your toddler to sleep. But if you start a new habit of singing to him or holding him or letting him twirl your hair until he falls asleep, you have formed another habit that you will need to break if you are unwilling to keep it up all the time. Any of those things are fine as part of your bedtime routine but if your toddler is actually falling asleep during one of them (or something else similar), you are now bound to the new routine. But with a predictable pre-sleep routine, a safe, sleep-friendly environment, and some patience on your part through the crankiness and crying, your toddler can learn to go to sleep on his own, without the pacifier.

For my toddler’s binky break-up, I used a combination of telling him it got lost and cutting off the tip. Initially, I told him it got lost and he was sad and sometimes angry but accepted my answer. At 2 ½ years old, regular mini meltdowns are just part of life so I was dealing with that all the time anyway. He asked about it every day for 5 to 6 days, but then stopped asking altogether.

After a few days, he found another pacifier under a bed. It was in a place where he could see it but not reach it. I told him I would get it and bring it to him, which I did, but I cut it up a bit with scissors first so it wasn’t what he expected. He told me it was broken so I said, “Oh, no. Now we have to throw it away,” and I guess it made sense to him because he threw it away right then. I do think it also helped that he was extra tired when he went to sleep at night during that time. He had been refusing to take naps (because he learned to climb out of his crib) and was SO ready for bed when the time came, so he didn’t need the pacifier’s help as much to get to sleep.

I was pleasantly surprised at how well it went. And I think that with the right strategies, your binky break-up will go well too. With any luck, you’ll be pacifier-free in no time and it will be merely a memory. Happy break-up!