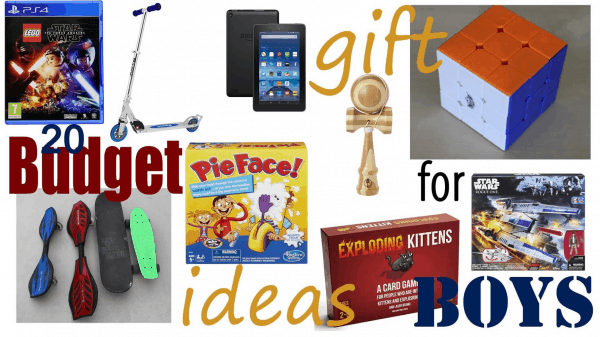 A good birthday or Christmas gift doesn’t have to be expensive. As a parent of five children, three of them boys, I’ve learned a lot from the many gifts I’ve given that were completely ignored after a couple of days. Even gifts my kids have suggested I get for them often go by the wayside. For that reason, I decided to put together a list of good budget gift ideas for boys that includes gifts they’ve used more than just a few days.

Kendamas are a ton of fun for kids and great for their hand-eye coordination. The one shown in the picture is the most popular model. It comes in various colors. For more advanced users there’s also the pill. For the pill, we like the pro version of it that has five holes for additional tricks and catching options.

There are several different brands that make Kendamas so be sure to read customer reviews to make sure you’re getting a good one. Some knock-off brands are not as well-made and may lose their strings or simply not hold up as well.

Overall this is a great toy for parents looking for something that their kids will like and use that isn’t electronics. There’s a bit of a learning curve, but after a while they’ll be able to pass the ball from one point to another and regularly get the ball in the peg.

Rubik’s cubes have been around forever it seems,  but this last year my kids came home from recess wanting one. I thought for sure, at first, that they’d want the original Hasbro one, but I was wrong. It’s not just about solving them anymore; it’s about doing tricks and solving the cube as quickly as possible. For this reason, they wanted a speed cube.

It might seem like a simple task to pick out a speed cube for your child, but in fact, it can be quite difficult. Various cubes are meant for different levels of players and allow you to cut corners. We had to purchase a few of them in order to figure this out. Without getting into great detail, I’d recommend the YJ Yulong for beginning to intermediate cubers.

Everyone always seems to want the latest and greatest video games for their kids, but it’s the classic options that will give you the most value.

There are a lot of Lego games out there so you may want to go with whatever one matches what your son is into. Having played several of them myself, Marvel Super Heroes is one that’s inexpensive and has a lot of great features. There’s a lot for your kids to do in the game and they can unlock the characters one by one. Available for Xbox 360, PS4, Wii U, PC, and more.

If you’re looking for a more recent release that you son doesn’t have, consider Lego Star Wars: The Force Awakens, released June 2016, as well as Lego Marvel Avengers, released January 2016.

If you’re willing to purchase the starter pack, expansions, and characters, Lego also has its Dimensions series. Ghostbusters and Fantastic Beasts and Where to Find Them, are the two new story packs released for the end of this year.

When this game originally came out we paid $60 for it. It’s now around $20. It’s a fantastic breath of fresh air in the Mario series and one of my favorites to date. Characters like Princess, who glides over gaps, and new suits like the Catsuit make this one a fun one for the entire family.

Calling it a craft can sometimes scare boys away, but my wife does a great job of finding crafts they really enjoy. Every time we do them all of their friends want to come over and do them with us. Here are a couple of easy ones to get going on.

All of our kids love Perler beads. They’re relatively inexpensive and allow them to create pretty much whatever they can think up. We like to use templates found online for specific character designs. My eight year old boy absolutely loves this!

Paracord crafting isn’t something that is super new, but it is something that boys will like. The materials, patterns, and colors that these cords come in certainly aren’t girly, and they can use paracord patterns to make just about anything. This includes bracelets, zipper pulls, bottle wraps, key chains, and even hanging chairs to name a few. 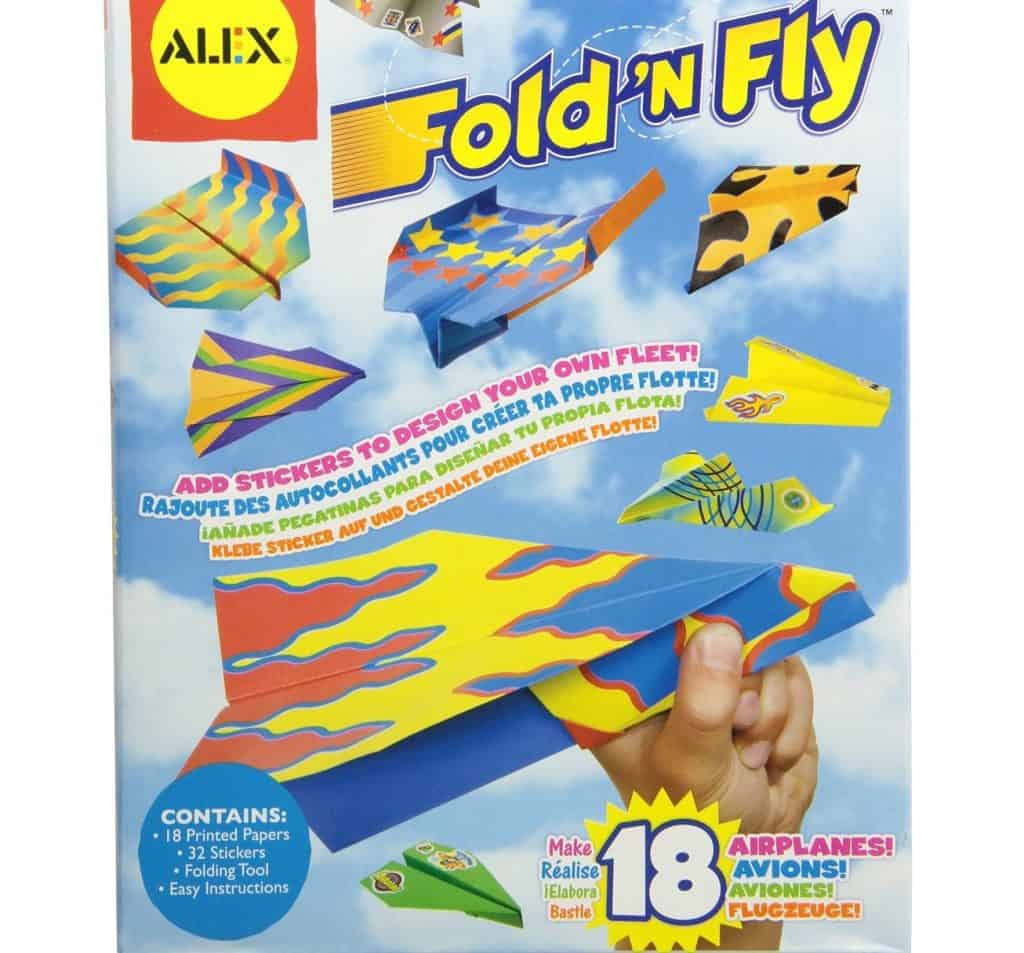 There’s something about paper airplanes that my sons absolutely love. The great part about them is that the material cost is super cheap. If your son is just getting started,  the Fold ‘N Fly set is a good place to start.

It comes with 18 unique airplanes with instructions on how to make them. After they’ve built all 18, you can also just use your own paper.

Between the “Star Wars Rebels” cartoon,  “The Force Awakens” movie, and the new Rogue One, my boys can’t get enough of “Star Wars” this year. If you’re wondering what’s new, I highly recommend you go to the Lego site itself. It’s the only place where you can truly find the latest release information.

If you’re going Star Wars, I highly recommend one of the newer Rogue One sets from the end of this year. Your boys will be super excited to get one after they see the movie in December.

If you want to go with something other than Star Wars consider Lego’s Super Heroes, Minecraft, or NexoKnights sets.

Legos can be super expensive. If you want a good alternative to legos, try the Mega Bloks, and Kre-O lines. They fit together well and cost a lot less. Are they as good as Legos? Probably not. Will you be afraid to lose a single piece for your long-term investment? No.

RipStik Ripster or Caster Board

I recently wrote about the differences between Razor’s Ripstik Ripster vs their Caster Board. These boards are easy to ride, a ton of fun, and fortunately not expensive. It’s easier to do tricks and get going on the Ripster ,while the Caster takes a bit more practice but is more stable for long distances.

There are a lot of great Razor scooters on the market that are affordable and well-built to get for your active boy. This is good because it gives you a lot of options but bad because it’s hard to know what to purchase. If your son is new to scooters, going with something like the Razor A3 is a good idea, as it has slightly larger wheels. For my oldest son, we recently bought the Razor Pro XX Scooter, as we wanted something with a bit better quality than Razor’s typical A series of kick scooters.

If you’re looking for a good price on any of these scooters, I highly recommend you look around Christmas time when prices can be as much as $25 off for the more expensive scooters.

I recently spoke up about what to watch for in mobile games and kids. I’m a strong believer in monitoring the screen time of your children. That being said, there are good things that can come from your child having a tablet. Using an application like Overdrive to borrow books from your local library is one of the big ones. Recently I wrote about the best budget tablet for your kids.

In that post, I talk about the Kindle Fire which can regularly be found for around $35 over the holidays or for as much as $50 during the regular season. It’s one that’s fast enough to run all the applications you like while still being affordable.

Believe it or not, my son comes home all the time asking for a fitness tracker or at least something that can record his steps. Apparently, all the kids at school have one this year. My wife recently wrote about the best fitness trackers under $100 and in it spoke about how we love the simplicity and price of the Garmin Vivofit bands. There are three generations of the Vivofit, with the first gen costing around $50, second around $60, and third-generation around $100.

For boys, I’d recommend the second generation. It’s just a bit more expensive than the first generation, has a few more features, and most importantly comes with a band that won’t fall off as easily.

I recently wrote about the best flip phones and GPS watches for kids. If you’re looking for a way to contact your son when he’s out and about, going with something safe like a flip phone or GPS watch is a great idea.

With the release of Pokemon Go this year, everything Pokemon related is extremely in demand. After the mobile game became so successful I found my son playing Pokemon on Roblox, watching Pokemon XYZ, and even trading for Pokemon cards.

If your child is just getting started, a cheap way to get a lot of different Pokemon is to get this 100 assorted Pokemon set. This is a good way for boys to have some cards just to mess around with and trade without getting too deep into the hobby.

If you’ve already got an advanced Pokemon card collector, you might want to go for booster packs instead as they will give you a chance at rare cards.

While this probably belongs in the video games section, I thought I’d mention that there are two new  Pokemon releases for the 3DS this year: Pokemon Sun and Pokemon Moon. The 3DS Pokemon games are always a hit and a ton of fun to play. This is the first new region we’ve seen since back in 2013 for the Pokemon franchise. It has some new Pokemon and allows trainers to explore a system of islands.

If your son has a 3DS but hasn’t gotten into any of the Pokemon games previously, you can probably save some money by going with one of the previous games, as these new ones are likely to cost you $35 to $40.

2 Good Board Games for Boys 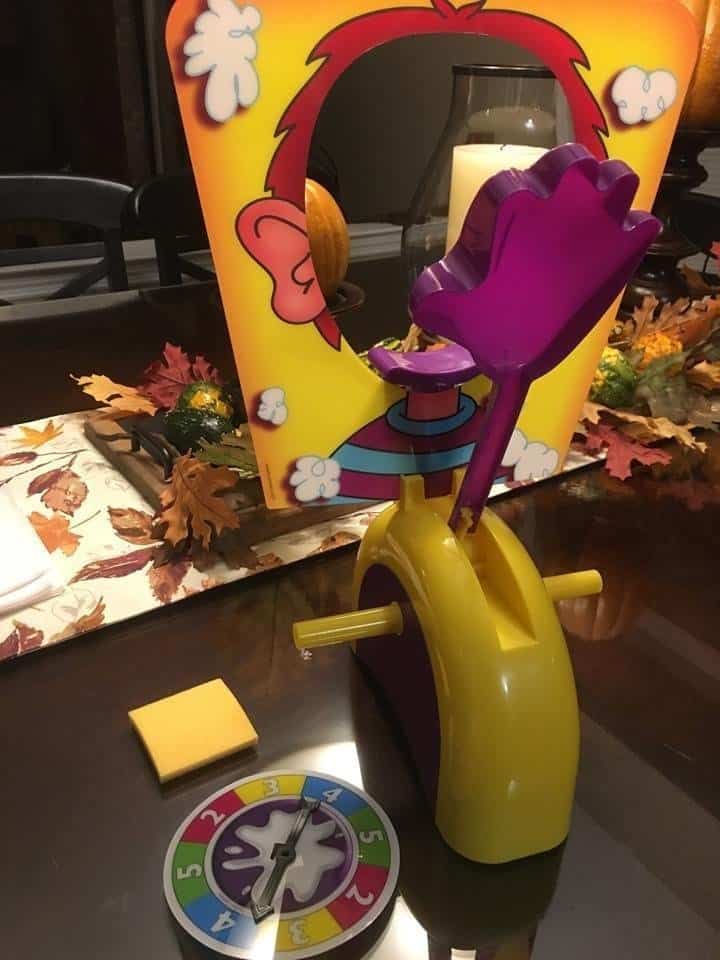 Boys love getting messy, so playing a game where they can potentially see Mom and Dad get whipped cream on their faces is right up their alley. This game was so popular last Christmas that it went for more than double the price from external sources. This year the price has come down back to normal.

If you’re looking for the latest and greatest, you can also get the Pie Face showdown version of this game. It puts two people side by side. The one who can mash their button the fastest wins!

Boys in the 7 to 10-year-old age category are a bit immature and love anything silly. What’s sillier than a game whose name is Exploding Kittens? The object of the game is to basically not draw the exploding kitten card which takes you out of the game. You can use various diffuse cards throughout the game to keep you from exploding. Action cards that skip your turn or allow you to see the cards ahead can also help you to avoid the infamous exploding kitten card.

It’s likely that your 7 to 10-year-old  son will think that card names like the Pig-A-Corn, Goat Wizard, Thousand-Year Back Hair, Taco Cat, and the Catterwocky are hilarious. Dad might think they’re funny too.

While you might assume this game is stupid, based on the name, it’s actually a lot of fun for the entire family and does involve strategy. The cards are a bit PG so be sure you’re ok with Magical Meat Bikinis and a Portable Cheetah Butt before purchasing.