You are here: Home / Coronavirus / Around The World Spring Break At Home For Kids During Coronavirus 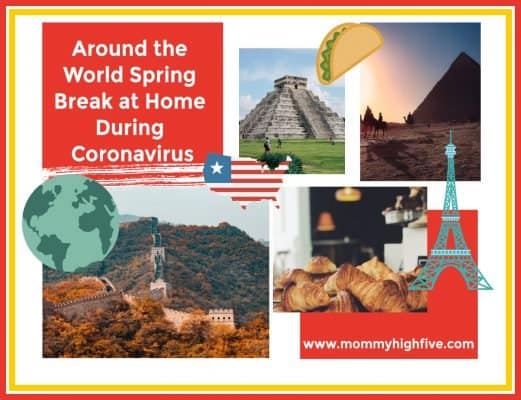 Are you wondering how to make Spring Break exciting for your kids this year? This week was Spring Break for my kids. Normally we would go have an adventure somewhere away from home. Because of the Coronavirus pandemic, however, we had to change our plans this year. I wanted to do something to make Spring Break fun while staying home. We decided to take a tour around the world while being home together.

I asked my kids what countries they would like to visit if they could go anywhere in the world. Then we did activities and crafts as well as learning about the history and culture of each country. We even made food from each country, which was a fun adventure. There were new flavor combinations we had never tried before.

We have been advised to stay at home as much as possible so I decided everything we would do for the week would be things we could do and make without going to the grocery store. That meant making adjustments to some recipes or altering art projects slightly to use only what we had on-hand. I admit that being a mom to quarantined kids isn’t easy, but putting in some extra effort paid off this week.

I decided we could focus on one country per day and “visit” 5 different countries. The countries we chose were Mexico, China, France, Egypt, and the United States. 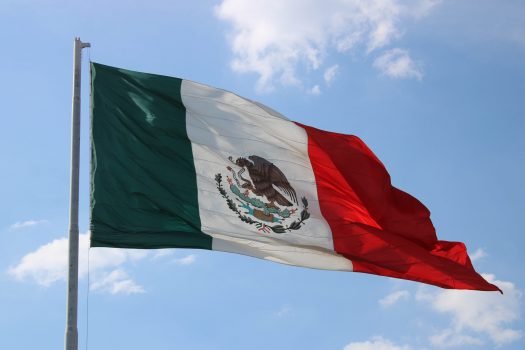 My kids were excited to learn about Mexico and try food that Mexicans eat. We have talked about visiting Mexico someday, and two of my kids have friends who are originally from Mexico. I had plans to make Mexican wedding cookies and possibly make homemade maracas, but my kids kept wanting to improve their robot pinata and we ran out of time. It was still a fun-filled day together! 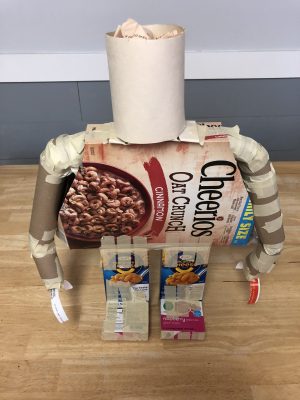 We learned about pinatas and how to make them. After watching a video on how to make pinatas from paper mache, my kids said they would rather make a pinata out of cardboard. I let them decide what they wanted the pinata to be, and we worked on it together. 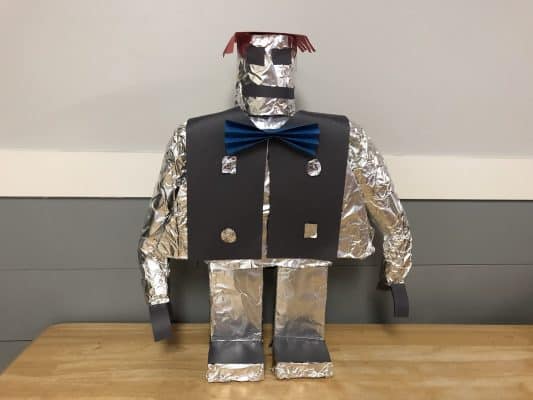 Once it was done, I wasn’t sure if they would really want to destroy it. They surprised me and were thrilled to beat it apart to get the candy inside. This was a fun but time consuming project. 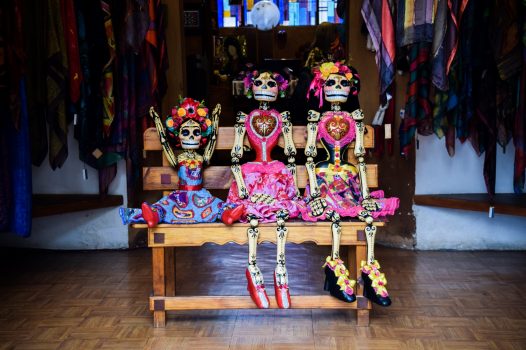 This movie left us with a lot to discuss about Mexican culture and ideals. We talked about the importance of family relationships and remembering our ancestors who have helped give us the good life we enjoy.

Activity: Learning about Chichen Itza and the Mayans

The following video was a great way for us to learn about Chichen Itza and the Mayan culture. 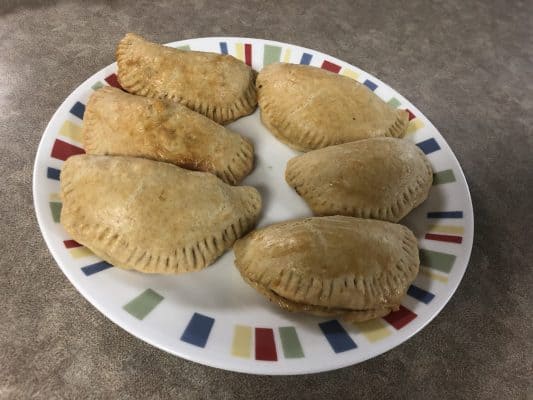 Although we eat tacos and enchiladas fairly often, we wanted to try something new so we had homemade empanadas for dinner. The kids had fun helping make and roll out the dough.

Since we have some in our family who can’t get enough spicy flavor and others who would rather have no spice at all, I left the jalapenos out of the filling and served the empanadas with salsa and enchilada sauce on the side.

These empanadas were delicious, and we will definitely be making them again. For my gluten-free child, I set aside some filling and he ate it in a corn tortilla.

It’s hard to listen to mariachi music and not get up and dance! We had fun listening and dancing together to this traditional Mexican music. The kids had a great time making up dance moves to go with each instrument. 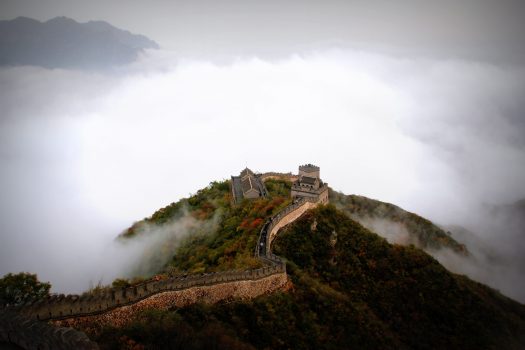 During college, my husband spent 2 years living in China. Our kids have always been fascinated by China and really want to go there someday. Our “China Day” was filled with fun and some new learning experiences.

Activity: Learning to Use Chopsticks 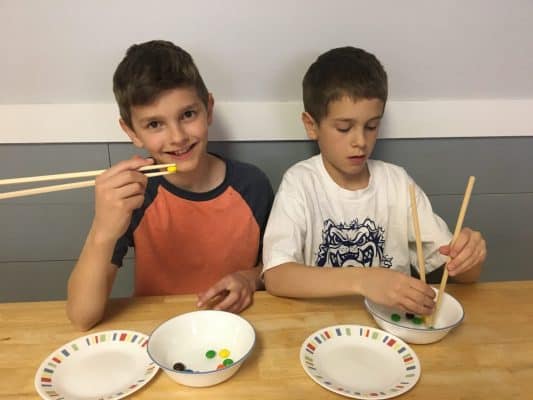 We learned it’s easiest to use chopsticks correctly if you hold them in the same grip you use to hold a pencil. Then we practiced using chopsticks to pick up m&ms and move them from a bowl to a plate. After we were finished, we enjoyed eating the m&ms! It was a bit tricky for the kids to learn to use the chopsticks at first, but then they got the hang of it and had lots of fun! 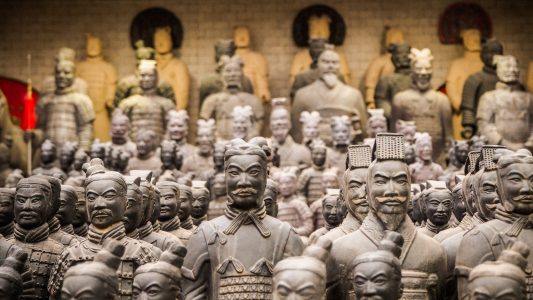 We watched a video about the Chinese Terracotta Warriors . My kids were amazed that over 8,000 pottery soldiers were made to be buried with the emperor to protect him after he died. We tried to figure out how these soldiers as well as horses and chariots were made so beautifully nearly 2000 years ago without the use of modern technology. 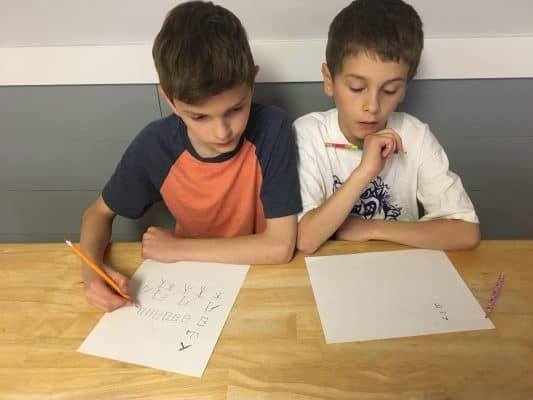 We learned that Chinese people don’t have an alphabet like we do. Instead, they write characters that represent words or ideas. We tried writing some basic Chinese characters. 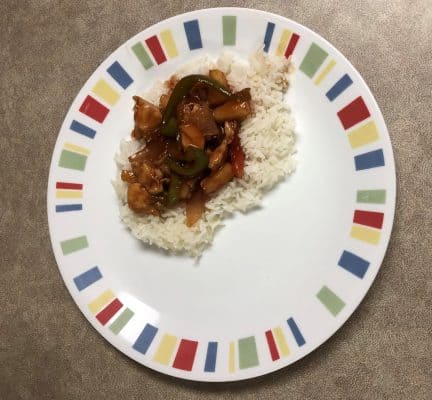 This music was very unique, and we guessed which instruments were playing. We learned that there are several Chinese instruments that are very different from instruments we are familiar with. My kids really enjoyed the “sliding” sounds the instruments made. 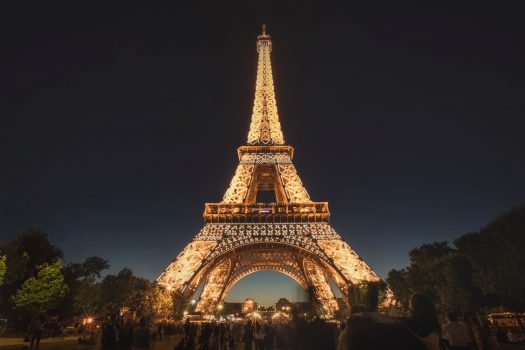 My husband and I took a trip to France a few years ago, and our kids have really enjoyed hearing about our trip and seeing our pictures. They chose France as one of our Spring Break destinations. 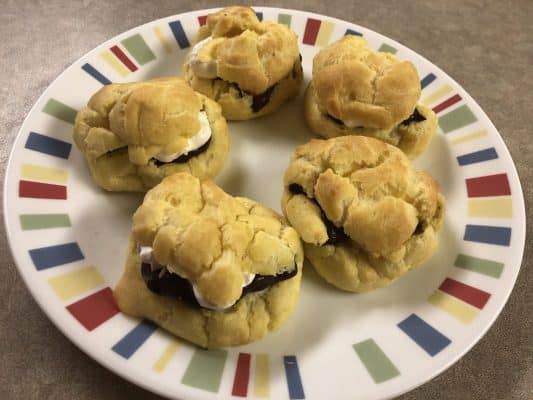 Instead of doing a craft today, we decided to make a French dessert–cream puffs. The kids helped with making the dough and the pudding. Since my gluten-free kiddo couldn’t eat the pastry, he just had the pudding and whipped cream. 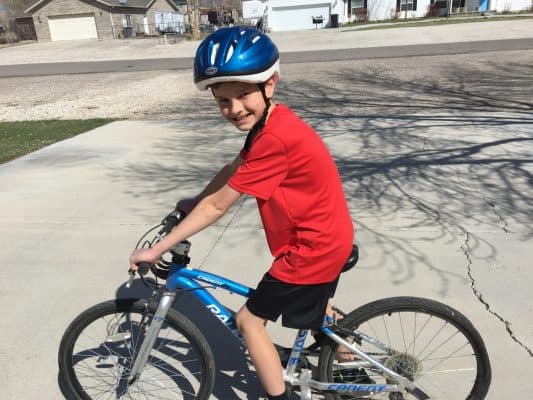 This week has been pretty cold and snowy, and finally today was warm enough to go outside. We learned about the famous Tour de France bike race and used it as inspiration to take a bike ride around our neighborhood. The kids (especially our 10-year-old) loved getting out of the house and getting some fresh air! And they were glad we didn’t go as far as the Tour de France riders do on each leg of the race!

Activity: Learning about the French Revolution 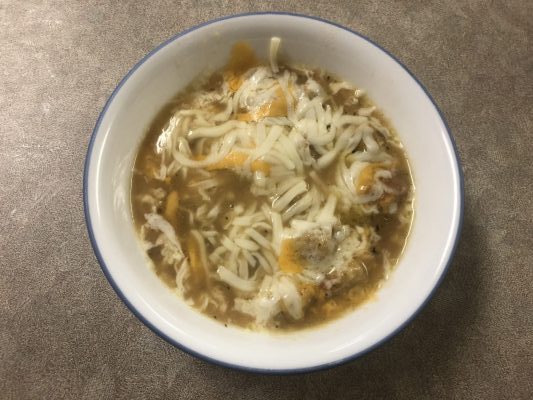 I had a lot of onions that needed to be used so we decided to make French onion soup. It was the first time I had ever made it. While the soup didn’t turn out quite as beautiful as the picture in the recipe I used, it was absolutely delicious and all of us really enjoyed it! We will definitely be making it again!

French accordion music is full of romance and beauty. My family really enjoyed listening to the accordion music. We also listened to classical French music by Debussy and Saint-Saëns. Our kids all play musical instruments and love the music of these composers. 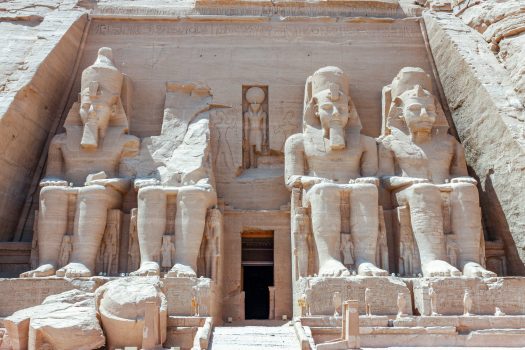 My kids were really excited about learning about Egypt. We have a 5th grader who was supposed to be starting a unit on Egypt at school before school was cancelled. Since we don’t know whether the teacher will cover the unit in online school, we decided to do some of it ourselves in a hands-on way. 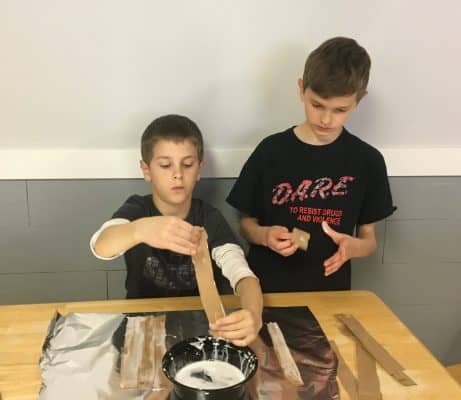 We discussed what papyrus is and how the ancient Egyptians made papyrus. We tore strips of paper from a paper lunch sack and dipped the strips in a mixture of Elmer’s glue and water. Then we layered the strips on wax paper and let it dry. While we probably could have let the papyrus dry overnight, instead we chose to use a blow dryer to dry it so we could draw on it sooner. 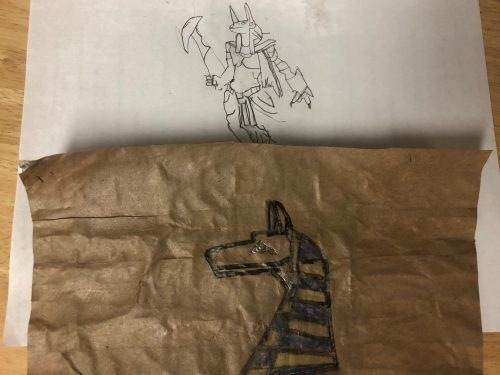 After the papyrus was dry, we looked up Egyptian gods online and learned about several of them. The kids each chose an Egyptian god to draw on the papyrus. The hardest part of this project was choosing just one god to draw. When they had free time for several days after, my boys were drawing other Egyptian gods as well.

Pyramids and mummies are fascinating for kids to learn about, and my kids were no exception. We watched a video about the pyramids and learned more about mummies. The idea of treasure being buried with the pharoahs was something my kids thought was so cool!

My kids agreed that traditional Egyptian music is different than any other music they have heard before (and we listen to a lot of different kinds of music). We enjoyed listening to the sliding sounds of this music. 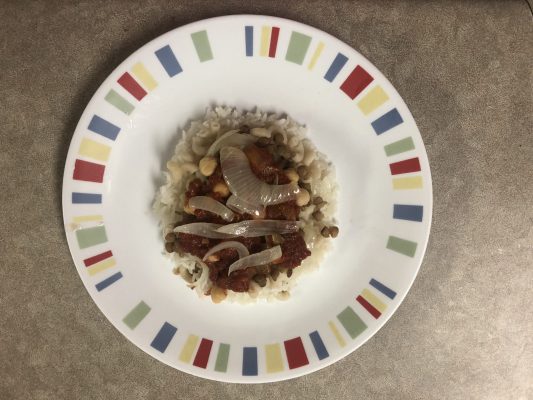 We chose to make Koshari (Egypt’s national dish) for dinner. This nutritious dish is packed with unique flavor. I was excited to learn that everything needed to make Koshari was in my pantry! While my kids are usually very willing to eat anything I put in front of them, Koshari was a bit too advanced for my younger kids’ palates. They still ate it but agreed it wasn’t their favorite meal. However, my husband and I loved Koshari!

Our trip around the world ended back home in the USA. We chose some of our favorite activities and food to finish off our adventures this week. 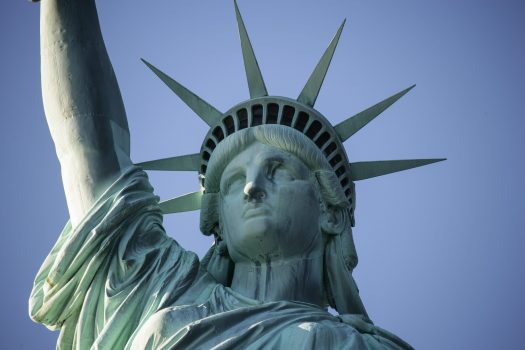 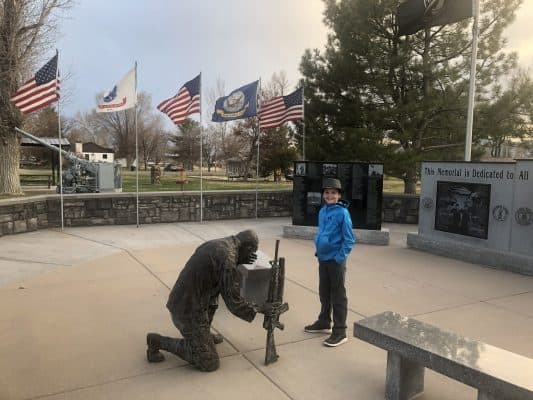 In our community, there is a Veterans Memorial dedicated to those from our area who have served in the armed forces. We read through the names of veterans listed on the wall and found names of people we know. This lead to a meaningful discussion about the importance of protecting freedom and standing up for what is right. 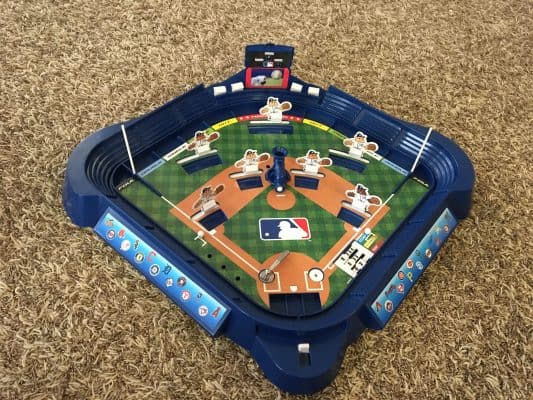 What’s more American than baseball? Unfortunately, the weather didn’t allow us to play catch outside so we played this baseball board game. You can also play a baseball game with dice and a pencil and paper. 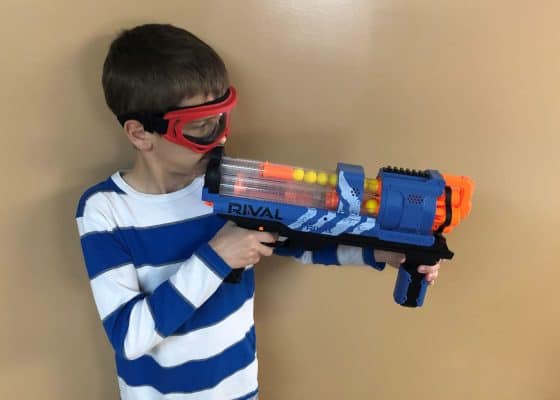 All of my kids (including my daughter) like playing with Nerf guns. Since the weather hasn’t cooperated for us to go outside much this week, we decided to have a Nerf war in the house. We had fun hiding out, jumping out to scare each other, and trying to dodge bullets. This activity gave us some much needed exercise and a whole lot of laughing and fun. 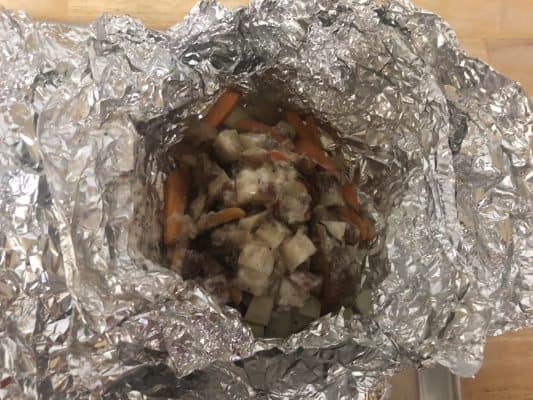 I know…Hamburgers and hot dogs are probably the most famous American food, but we decided to do something different. When we go camping, we like to eat tinfoil dinners (also known as hobo dinners). We wanted to build a fire in our backyard fire pit, but Mother Nature decided it was a good evening to snow so we baked our dinners in the oven,

Tinfoil dinners are easy to make and you can put in whatever you like. Since I have been using only what we have at home, we used ground beef, carrots, potatoes, and onions. I seasoned with Worstershire sauce, salt, pepper, garlic powder, and topped everything with some ranch dressing. I cooked them at 350 degrees for about an hour.

There are so many great genres in American music. We decided to listen to some American music that our kids aren’t as familiar with. They enjoyed listening to the bluesy sounds of the jazz music and the exciting beat of rock and roll.

Our Spring Break around the world was a success. Even though we couldn’t physically travel to all of these countries, we had a great time learning together and experiencing some of the culture, food, and history from around the world. There are so many more activities we could have done (we probably could have spent an entire week learning about each country), but these were great activities to do during Coronavirus quarantine. We will likely do this kind of adventure at home again sometime in the near future, even if it’s not due to the COVID-19 lockdown!